Renfrewshire’s Boys make it 3 in a row 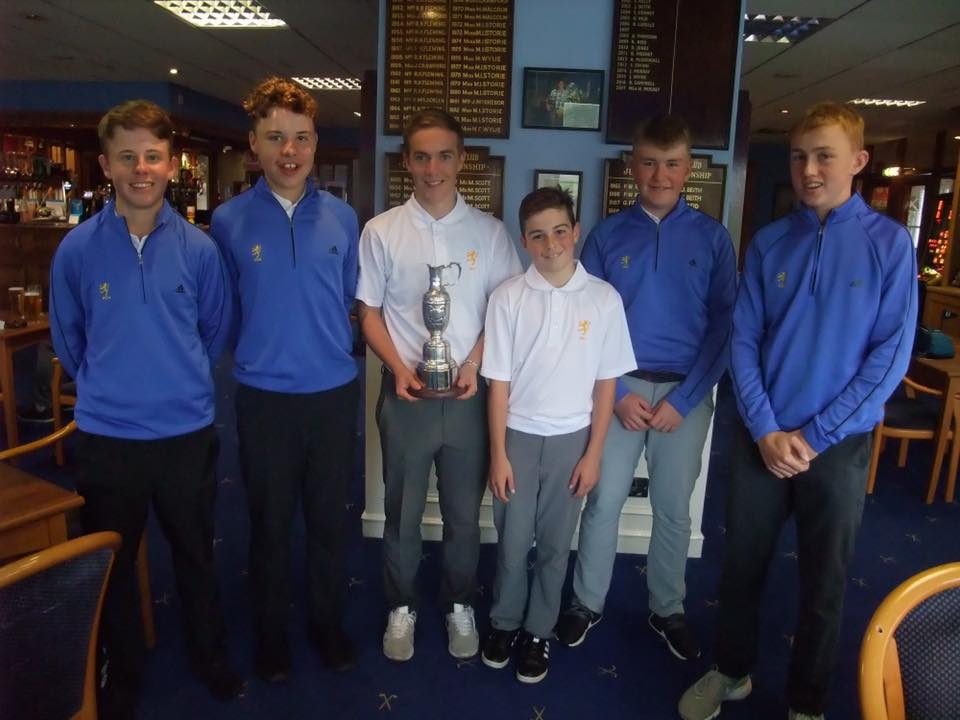 Renfrewshire Boys Golf Team retained the West League Title, with a 3 in a row win, despite losing 5 – 3 at home against Stirlingshire at Elderslie Golf Club on Sunday 10th September.

This is the first time the team has been beaten in the last 3 years, so great credit to Stirlingshire in very difficult conditions.

The course was as you would expect heavilywaterlogged due to the recent wet weather, and despite the rain during the day the course remained playable which is a credit to the green staff at Elderslie.

The Renfrewshire team showed a number of changes from previous matches, and with must under 18 players unavailable we had to field 6 under 18’s to make up the numbers.

Scott Newman at 11 years of age set the team off, possibly the youngest player ever to represent the county, was in charge of his game, and was 2 up with 5 to play, but ran out of steam and after a poor drive at 18 lost 2 down.

Jonny Murphy was always struggling to find his best form and with a lack of recent practice lost 2/1.

Timmy Erskine was having a nightmare of a front 9, losing 8 balls and being something like 17 over par ,was 7 down at the turn, however he kept going and made his opponent work hard eventually losing by 5/3.

Cammy Johnstone brought hope to the home team and despite having a nightmare at the first hole, much to the amusement of his fellow players on the tee, had the last laugh bringing home the first points of the day with a 5/4 victory.

Roddy McAuley promoted to the Under 18 slot made up for his disappointing performance in his last match and came in with a solid 1 hole victory.

Aidan O’Hagan, again promoted to the Under18 slot, and playing for the County at this level, for the first time did not find his best form, too much golf maybe, and lost 2/1.

With Euan English in the final game having lost by 3/2 working hard but never in complete control it was left to Kenan Ingram to save the day.

Kenan had never been behind and was 3 up after 13 despite a fortunate escape at 12 where his opponent made the most unlikely of pars with a miracle 3rd shot, while Kenan struggled for par.

However the match turned when his opponent won the 14th and 15 with par, with the 16th halved in par.

At 17 his opponent hit drive to the right and blocked out by the trees which he hit with his second shot, while Kenan went left and had a clear shot into the green. A solid shot to the centre of the green from Kenan was enough to secure his par and victory.

All credit to the boys from both teams in a game which was played in very difficult conditions due totally to the atrocious weather which we have had over the summer period, but great credit due to Elderslie Golf Club for the condition of the course.

The match, as always, was again played in a very sporting manner