The County Cup, also known as the County Team Matchplay Championship, is open to all member clubs of the Renfrewshire Golf Union. 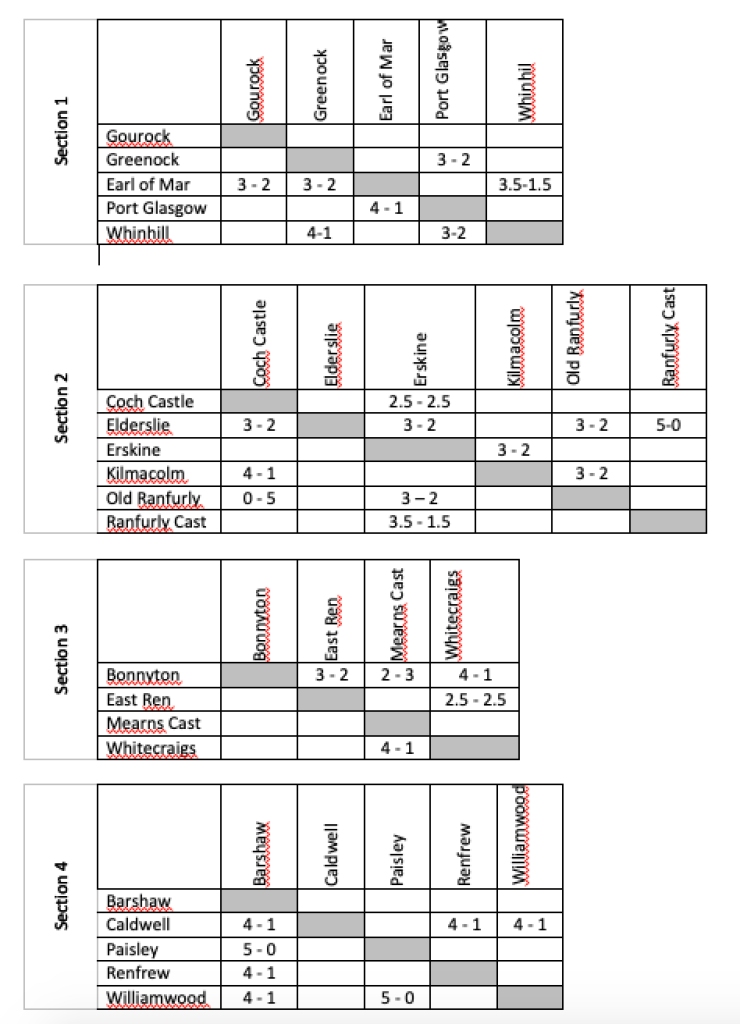 The County Cup, also known as the County Team Matchplay Championship, is open to all member clubs of the Renfrewshire Golf Union.

Team members can vary in each round as long as the handicap limits are complied with.

Selection of players must be based on their current handicap on the day of the tie. Clubs are not permitted to select players with a handicap lower than the category they represent; e.g. a player with a current handicap of 12 cannot be selected to
represent the Category Three section 13 to 20. Once the team lists have been exchanged, if a player’s handicap is lower than the
category he represents, the match is considered void and his opponent wins the tie 10 and 8.

Results of matches are based on normal match play rules; e.g. if a player is 4 holes up with only 3 holes left, the player wins 4&amp;3. The game is therefore finished on the 15th green and is not continued through 18 holes. This counts as 4 holes up if the
aggregate of matches won has to be used as a tie-breaker.

One team point is awarded for each category match won, ½ point for halved match and 0 points for a loss. Thus in each tie there are 5 points available, with the team scoring 3 points or more being declared the winner.

Each Club will play the other Clubs in the Group once. The Club in each Group with the highest number of points won will progress to the semi-final of the competition.

In the event of a tie, the winner of the Group will be decided as follows:

A Club cannot concede a match in the League stages. If a Club is unable to play a match, then the Club will be disqualified and the results of any matches played will not count and will be excluded.

The results of matches will be e-mailed to club contacts and posted to the RGU website as soon as they are available – www.renfrewshiregolfunion.co.uk.

Clubs progressing to the next round will be informed, by e-mail, of their opponents after each round is completed.
The closing date for each round must be adhered to, the onus being on the Home Clubs to arrange suitable dates. Under no circumstance will extensions be allowed. The Home Club must offer at least one weekend date. The start date for the next round is the day after the end date of the previous round. The Final will always be played on the first Sunday in September.

There is an entry fee of £25 per team and this must be paid prior to the tournament starting.

Clubs must ensure that the players representing their team adhere at all times to the dress rules of the club they are visiting. Clubs drawn to play a home tie should afford the courtesy of catering for visiting players.

A Club may cede home advantage, if the opposing Club is in agreement. The club ceding advantage will still be considered the home club in the event of a tie. It will also be responsible for the catering costs. Results of matches should be sent to the County Cup Convenor and the Secretary by the both Clubs, preferably by email, immediately after the match. Minimum information required is the overall score and the result of the Category 1 game.

All queries and disputes should be referred to the County Cup Convenor, preferably by e-mail – see above for contact details.
Member Clubs MUST inform the County Cup Convenor of the person to be contacted in connection with their team – name, address and email and/or telephone number, prior to the start of the competition.

Distance Measuring Devices may be used in this competition as long as they conform to SG regulations.