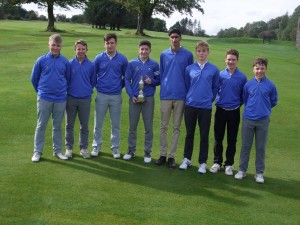 In a match played in very windy but dry conditions, the Renfrewshire Golf Union Boys Team retained the West League Title which they won in 2015 by defeating Glasgow Golf Union at Ranfurly Castle by 6.5 matches to 1.5 matches.

The team went through the season, again unbeaten with 3 wins and 2 draws.

The wind caused a lot of problems for the boys, most finding it difficult to control the ball evidenced particularly at the first hole where over 60% of them either found the right rough or went out of bounds.

This was something to be repeated throughout the course with numerous lost or out of bounds balls being played.

However the Renfrewshire boys appeared to be coping better than their opponents, but at the turn the match was very much in the balance with 3 of the under 16 players being well down and the Under 18’s being very even.

The holes after the turn proved crucial, as first Roddy McAulay turned a 3 hole deficit after 9 into a 2 hole lead by 15, eventually winning by 3/1.

Greg McCaffer in his first outing for the RGU was 4 down after 10 but said “he was now coming onto his game”, and proved his point by securing a half match.

Cameron Johnstone was not at his best and poor putting cost him the game as he lost by 3/2.

Aidan O’Hagan the youngest player in the team, but a boy to watch out for in the future, played the anchor role for the Under 16’s in the absence of Tom Mackenzie and was never in trouble running out a comfortable 7/6 winner.

Angus Frood on his home course where he is Junior Champion was always in command against Jack Crawford, who admitted that his golf was a bit out of sorts, won 6/4.

Jamie Sinnamon, he of few words, but a great ball striker, was never down, but threw away some good leads before setting the nerves of the management by winning by 2 holes.

Jack Currie, a bit of an enigma at times, played the worst shot of the day off the first tee, while his opponent was clearly in trouble out right he hit his tee shot further right into a garden neighboring the course, neither found their ball, and the hole was halved in 7 !! This was a bit of an up and down game and while Jack never lost the lead, mistakes kept the game close. He eventually ran out winner by 3/1.

In the top match Ibrahim Hussain, looking for his first win for the RGU came up trumps and put in a great performance, never behind, he built a comfortable early lead which he never gave up and ran out a comfortable winner by 6/4.

The Renfrewshire Golf Union are delighted to have retained the league trophy despite the fact that boys who played earlier in the season were no longer available as the have gone to University in both Scotland and the USA, or in the case of one who is now living in Holland.

This does show the strength in depth of the RGU Boys, and is a great reflection on the coaching programme driven by David Orr at Eastwood Golf Club and Mark Loftus at Mearns Castle and the support of the clubs with in the RGU who nominate their juniors into the coaching programme. We look for their continued support to promote Junior Golf In Renfrewshire